Volume X Chapters
In mediaeval Bedwyn, there were two famous wool merchants who prospered during the reign of king Edward III. Sir John Malewayn was lord of Marten manor, and held several estates in Grafton and Shalbourne. He made his fortune in London as a city financier, and he might have ended his career as Lord Mayor of London, save for a premature death due to the return of the great pestilence, or Black Death, in 1360.

In contrast, Sir Roger Normaund held a small estate at Henset, near Chisbury. He was a successful Southampton merchant who traded in wool, wine, and fish. He created an impressive holding of small estates in Hampshire, Wiltshire, and Gloucestershire which complimented his career as a wool merchant. He was also a military man, and his exploits at sea earned him the respect of the king. Sadly he fell victim to the first occurrence of the great pestilence, and he died in 1349. His son and heir also probably fell victim to the plague. His grandson’s death in 1360, which may have been due to the return of same pestilence, which ended the life of John Malewayn, finished the dynastic ambitions of the family.
​
There were other merchants in Bedwyn, not all of whom were successful. Failure could lead to bankruptcy and debt, and this fate befell William de Wyke, the bailiff of the Hundred of Kinwardstone in 1358.

Sir Roger Normaund
Sir Roger Normaund was a wealthy and successful Southampton merchant who traded wine and wool in Flanders and Gascony, and loyally served the crown during the wars with Scotland and France. He died in 1349, and his Inquisition Post Mortem records indicate that he acquired an impressive number of estates by investing the profits of his mercantile activities. One of these estates was Henset, which lay between Chisbury and Puthall. However, these records also reveal that the merchant was not solely motivated by profit. Several of his purchases benefitted family members and fellow merchants. Sadly, several of these records reveal the impact of the Black Death upon some of his estates, and successive recurrences of the pestilence may even have caused the death of the merchant and some of his heirs.
​
John Malewayn
John Malewayn [1310 - 1361] held no land in Bedwyn by right of inheritance. He was a landless younger son, and he acquired most of his local estates in Marten, Shalbourne, and Grafton, after becoming a prosperous wool merchant and city financier. He advanced a lucrative career in the service of King Edward III, not only in London, but also overseas in the Netherlands. He served as governor of the wool staple at Bruges in 1359, and in the same year he was elected as alderman of the city of London. He may have had the opportunity to be Lord Mayor, but his career was cut short by an untimely death. Perhaps John Malewayn could have been Bedwyn’s Dick Whittington. 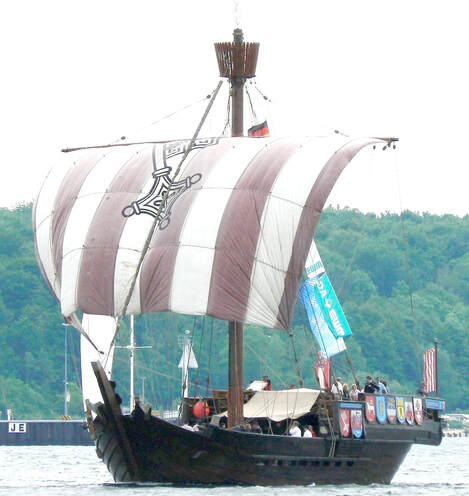 Ubena von Bremen Kiel 2007. Creative Commons Licence
​The Bremen cog dates from the 1380, and was discovered in 1962. This is a slightly later example of the type of merchant ships used by Sir Roger Normaund and John Malewayn.​