Volume IV : Chapters
Bedwyn Estates
Surviving Saxon land charters reveal the willingness of late Saxon kings to divide royal estates in order to reward retainers and to endow monasteries. Despite the award of land in Bedywn to Earl Bica in the eighth century, and to Abingdon Abbey in the early tenth century, the crown had recovered these lands by 978, and apparently reunited the Bedwyn estate. However, this estate no longer existed in 1066. Entries in the Domesday book of 1086 reveal that 16 manors had been created out of the Bedwyn estate during the final years of Saxon government.

The crown may have developed Bedwyn as a market centre after 978. The presence of a minster church, a Saxon guild, a mint, and burghal plots suggest a settlement of some importance. The layout of the market place with Back lane running parallel to Church street invites comparison with the layout of Ramsbury and the Parade in Marlborough. There are all the indications of a planned Saxon town at Bedwyn. However, the creation of Savernake forest after 1066, and the removal of the mint, ensured that Bedwyn did not develop as an important market centre. It withered on the vine, andremained an "out of the way" place, bypassed by the rapid growth and development of Marlborough. Nevertheless, the borough was exempt from forest law, and survived as an appendage to Wexcombe manor. The borough status enabled the election of two Members of Parliament from the late mediaeval period until 1832.

The crown never exploited Bedwyn apart from the alienation of estates in the late Saxon period. The royal estate paid one night's revenue as an annual fee, sufficient to accommodate the king and court for one night. King Edward the Confessor probably took advantage of this custom when he stayed in Bedwyn in 1042. However on most occasions, the estate provided the crown with an annual supply of provisions, rendered in wine, ale, and food.
​
During the summer of 2017, UCL London organised a series of excavations in Great Bedwyn to learn more about its Saxon period. The results were disappointing, but will hopefully lead to further investigations and success.
​
Domesday Survey
The outcome of the battle of Hastings was devastating to the landed gentry of Bedwyn. Virtually all the Saxon tenants-in-chief lost their estates to followers of King William I. The tenure of the Tidcombe estate was unique in this respect. In 1066 it was held by a thane called Wenisi, and in 1086, his widow held it still:

“Wenisi's wife holds Tidcombe. Her husband held it before 1066; it paid tax for 2 hides. land for 3 ploughs. In lordship 1 plough with 1 slave; 2 villagers and 6 smallholders with 2 ploughs. A mill which pays 15s; woodland 4 acres; pasture 5 furlongs long and 2 furlongs wide”

King William I sometimes provided for the widows of his fallen enemies, and Wenisi may have died at Hastings. Otherwise the only other estates at Bedwyn to remain out of Norman hands were those of the priests at Burbage and Bedwyn. The fate of the other English tenants is unknown.

Twenty years after the conquest, King William I was faced with the prospect of a Norwegian invasion. In order to ensure he could exact the maximum number of knights, and revenues with which to raise an army, he ordered a survey and valuation of all English estates in his kingdom. This survey paints a remarkable picture of English estates in 1066 and presents the Bedwyn estates in great detail. The latin text of the survey is easier to translate than to interpret, and it is not always possible to trace the subsequent history of the estates. Many of them disappeared in the mediaeval period, often through alienation of part of the estate of through merger with another.

According to Richard FitzNigel, the Treasurer of King Henry II, the Domes survey was known to the English as 'Domesday', or the day of Judgement:

"for as the sentence of that strict and terrible last account cannot be evaded by any skilful subterfuge, so when this book is appealed to ... its sentence cannot be put quashed or set aside with impunity. That is why we have called the book 'the Book of Judgement' ... because its decisions, like those of the Last Judgement, are unalterable"

Richard FitzNigel wrote the Dialogus de Scaccario, the Course of the Exchequer, and Constitutio Domus Regis, the King's Household, from which the above is quoted.
​
Wexcombe
Several Bedwyn estates, including Wexcombe, Wilton, Froxfield, Stock, West and East Bedwyn, were excluded from the Domesday survey. In 1086, most of these estates were still part of the royal estate at Bedwyn. Froxfield was probably part of the Chisbury estate. During the disastrous civil war of the Empress Matilda and King Stephen, many royal estates passed into private hands. King Stephen granted an estate at Wexcombe to John le Marshal at the beginning of his reign. This seemingly remote and obscure estate was anything but. It included the land of West Bedwyn and Stock, part of Wilton, and the incomes of the Borough court and the Kinwardstone hundred, and it remained the wealthiest "Bedwyn" estate throughout the mediaeval period.
​

For an overview of the Domesday survey, there can be no better introduction than Michael Wood's "The Domesday Quest: in search of the Roots of England". Click on the iBooks link below for a sample of this book.
THE DOMESDAY QUEST
Michael Wood also presented a television programme, "Domesday to Magna Carta", part of his Story of England series. For details of how to view this programme online, click on the iTunes link below.
​
STORY OF ENGLAND 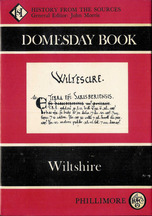 The original text of the Domesday survey is written in latin. Numerous translations have been made, and the entry for the Bedwyn estates have been taken from the Volume for Wiltshire in the Phillimore series produced by John Morris, and Caroline & Frank Thorn. An electronic version is available from the University of Hull. This translation of the Domesday survey is accompanied by a useful selection of notes.

Another useful source of information is provided by the Victoria County History, or the Victoria History of the Counties of England. Volumes on Wiltshire, now 18 in number, have been published since 1947. Volume 16 records the hsitory of the Kinwardstone hundred, and includes the parishes of the Bedwyn estate.
Domesday Book at Hull