The Origins of Bedwyn
Chisbury Camp

Volume I Chapters
This the first volume in a series of books on the origins of Bedwyn. For those of you not fortunate enough to have lived in the area, or to have ever visited its many attractions, Bedwyn lies in rural north east Wiltshire, between Marlborough and Hungerford. At the heart of this attractive area lies the village of Great Bedwyn, which is surrounded by a number of smaller settlements, all currently prospering as part of a commuter belt for Swindon, Reading, and London.

During the reign of King Alfred the Great, there was a royal estate called Bedwyn. The boundaries of this estate are defined by a series of charters, produced between 778 and 968. It is a daunting, perhaps impossible, task to identify these boundaries today. They certainly do not conveniently map onto modern parish boundaries. However, the royal estate included the four modern villages of Bedwyn and Grafton, Burbage, Chisbury, Wilton, Marten, Tidcombe, and Wexcombe.

Bedwyn is an area where one can smell the history. There is always something to notice in the landscape. For this reason I was initially interested in discovering more about Bedwyn’s past. Although I was fortunate to find that  several books have been published on Bedwyn, I also found that none of the publications contained a comprehensive study. I therefore decided in 1992 to start on my own research.
​
Historians
This volume attempts to explain the origins of Bedwyn through its historians. The history of Bedwyn has also been shaped to a great extent by the historians who have put pen to paper over the last few hundred years. It  is through their eyes that we glimpse the past. It may sometimes be tempting to dismiss their narratives and conclusions, but hindsight is a privilege which only the following generations can enjoy.

Books cannot always provide the full story. Other sources of history, such as archaeological excavation and fieldwork, are essential in proving, or disproving, the written word. Sometimes, they are the only source of information available to us.

Geology
The landscape of Bedwyn has defined settlement patterns and boundaries, influenced building styles, and determined the exploitation of the land. It has also provided a multitude of place names. Modern man maybe tied to the television set but his ancestors were tied to the land and the seasons. An understanding of the underlying geology can help to explain some of the mysteries of Bedwyn.

Ancient Ancestors
Finally, this volume offers glimpses of the area during the Neolithic, Bronze Age, and Iron Age periods, and concludes with an account of the Roman period. Although the people who lived through these times can often seem dim and distant, there are a significant number of local archaeological sites. You have only to wander casually into the Bedwyn area, and you will find evidence of their history all around you. We may know and understand little of these ancestors, but they are, according to Richard Muir, the truest children of the chalk, and no less real than more recent ancestors.
​
Chisbury Camp
In the spring of 2017, University College London (UCL) and Community Archaeology (CAGG) surveyed the interior of Chisbury camp. Results did not live upto expeactations, but some faint circular features, possibly evidence of Iron Age circular round houses, were identified. However, the author of the CAGG report noted that "I have marked some of the possible ones in red.  The problem with these is that the more one stares, the more one invents!" Perhaps Chisbury camp is not quite ready to surrender the history of its past.
CHISBURY 2017
Roman roads
Local Roman roads led to Cunetio, to the east of Marlborough. The route of road from Winchester is very well preserved and in most cases is still used within Bedwyn. In contrast, the Sarum road has left little traces of its path. Glimpses of its route may be found in Braydon Hook. There are several villa sites in Bedwyn, perhaps the most famous is in in Castle copse. There is nothing to see above ground, but there have been several excavations. In 1997, Eric Hostetter published The Romano British Villa at Castle Copse, Great Bedwyn (Indiana University Press), after a series of excavations.
​
Secrets beneath Savernake Forest
In 2006, a Lidar survey of Savernake forest was conducted. Lidar (Light Detection and Ranging) is a remote sensing technology which is used to survey the ground from the air. It provides an ability to see through trees and undergrowth, and see the shape of the land below. As one of many results of this survey, an Iron Age temple was discovered near Luton Lye. View this BBC report on the discovery of the temple: Secrets beneath Savernake Forest.
​Where is Bedwyn?
Bedwyn lies on the eastern borders of Wiltshire with Berkshire. The area lies in a small triangle of land which is approximately defined by three roads. These roads, the A4 Bath road, the A338, and the A346, serve the towns of Marlborough and Hungerford, and the village of Burbage. Today, Bedwyn is defined by the territory of half-a-dozen parishes.
Recommended Reading
An overview of the early periods of British history, from the Neolithic to to the Iron Age, are presented in Prehistoric Britain by Tim Darvill. Click on the iBooks button for full details and the option to download a sample of the book.
For a general introduction to the Roman period, try "Roman Britain" by Guy de la Bedoyere. Click on the iBooks button for full details and the option to download a sample of the book.
​ 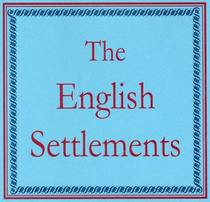 The Oxford History of England. 1B. The English Settlements. by JNL Myres. 1986 Oxford Clarendon Press.
In 1992, I was browsing through this book at a book club sale in Swindon. I was intrigued by several references to Bedwyn, and subsequently bought the book. If you want a coffee table book, this is not for you, but if you want to build a firm foundation on early English history, this book is an excellent starting point. Reading Myres has certainly encouraged me to learn more about Bedwyn.

Myres first published this book in 1936 as part of a volume on Roman Britain. This revision was completed 50 years later as a separate volume. The new content reflects an increased knowledge and understanding in early English history.
Since 1986, many Anglo-Saxon scholars have contributed to the study of early English history. In recent years, there has been no shortage of publications, printed and online, on this period of history. However, be wary of what you read. So many conclusions have been based on such a paucity of evidence, a state of affairs which perfectly illustrates why this period of study is known as the Dark Ages.
Download PDF file
Downloads
Bedwyn Origins files are available in September 2020
Download epub file